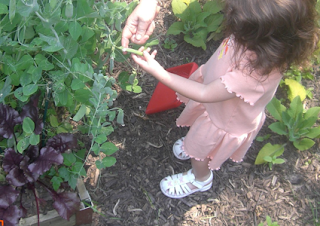 Almost thirty years ago I met Harriet Heany, who, along with her husband Hal, had the most marvelous, enchanted garden I had ever seen. We lived around the corner, and over the years I would bring my very young children to their garden. If the gate was open, it was a sign that you were welcome to enter the garden. (great pre-reading experience) Behind that garden gate were all varieties of perennials flowers and all sorts of vegetables- including asparagus, which I had never seen growing in a garden- especially a garden in a residential neighborhood in the city of Philadelphia. In fact, all those years ago, until I met Harriet, I think I could only identify Dandelions and Roses, and the smell of lilacs comprised my entire portfolio of gardening knowledge. However, as I listened to Harriet explain to my children how Lady Slippers and Jack in the Pulpit got their names, and as she shared her ‘pulmonaria’ and forget-me-nots, my own garden began to blossom along with my Latin, and vocabulary of ‘common names’ of all things floral. And she also showed us how vegetables grow, from her seeds, to her cold frames, to the giant asparagus which grew each year, we learned not only where vegetables ‘come from’ but how you could plant them yourself! She was also a genius as far as I could tell- because in addition to vegetables and flowers the garden also featured ‘sponges’ that grew on vines, and friendly insects which had their own names too. For me, Harriet and Hal were like a warm neighborly personification of Mr and Mrs MacGregor who inhabited the Tales of Peter Rabbit. The day that Hal show my preschoolers how to build a low cement wall- by using the giant watering can to get just the right consistency, he was forever ‘cemented’ in my mind as the timeless literary figure come to life.
Harriet and Hal were well into their 80’ when I would visit them. They were Presbyterians and had no children of their own. However, by opening the gate to their garden, and sharing the joys of gardening from the depths of their hearts, they gave life to generations of gardeners who learned to love the earth, because of the love you felt when you entered the gates of their garden. Their memory as well as the thousands of perennials they ‘split’ over the years live on in gardens and hearts of all who took root in the richness of their Mt Airy garden.