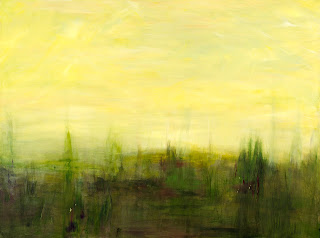 It was the afternoon of the evening of January 12th, 2011, also known as Erev Rosh Chodesh Shevat and I went to visit my grandchildren.
I have always loved the holiday of Tu B'Shevat- simply named, the 15th of the (Hebrew) month of Shevat. When I was a child I loved the 'treats' we were given in Hebrew School- especially the bokser that I couldn't even bite. I did love trying to make music with it. I was very skeptical of a land called Israel which produced this inedible, strange 'bokser' was it a seed? a fruit? Way before there was 'fruit leather' there was something called 'bokser' (carob)
This harsh and ugly fruit certainly had an effect on me. I can't explain why, but I loved the physical connection to a foreign Eretz Yisroel. Years later, I was struck by how the hard inedible 'tree candy' of my childhood had become a brown paper tree covered with super soft cotton balls, dipped into pink paint and pasted together in classrooms across North America! The meaning and magic of Tu B'Shevat had escaped generations!
Now the TuB'Shevat Seder has begun to rival the Passover Seder- becoming the quintessential holiday of the environmental movement. Creativity, Kabalah, and agricultural enthusiasts of all ages have joined forces to connect so many different people, on so many different levels to this one day on the Jewish Calendar, Tu B'Shevat- the 15th day of the month of Shevat, arriving this Thursday, January 20.

But let me return to the almond, the moon and the cupcake tree. Think of them as three essential ingredients for the development of the 'spiritual imagination' - just add a Y (why?) and you have the beginning of a new (or re-newed) 'holistic' Tu B'Shevat! It's physical- you can taste it, you can feel it, see it. It's intellectual- you can contemplate the changes in the moon, you can see by the light of the full moon and learn the ins and outs of every fruit and kind of tree. And, it's good for the soul- the Rabbis say that, "Whoever blesses the new moon, brings the Shechina (the Divine Presence) into their lives."

Let's take it slow.
the almond + "Y" ? it's a nut! it's a flavor! it's a tree! it's a blossom! It is way more than a pink painted ball of cotton! When I was a Jerusalem Fellow, we lived in Israel for over a year. I came with my paints. I was on a mission to see and understand the mystery of the "Shekadia" the almond tree- the musical star of the TuB'Shevat.

We lived in the neighborhood of Har Nof (mountain view) which borders on the Jerusalem forest. I walked the forest frequently and traveled the roads of Israel for months from August (Av) until February- Shevat. It seemed like a miracle- as most physical changes in Israel do.
Overnight there were 'puffs' of pinkness- appearing like dots over barren hills in the distance.
Sure enough, on the very day of the 15th of Shevat, on my walk in the Jerusalem forest, there it was up close: the Shekadiah itself! Up close and personal, the almond tree and me. I saw the blossoms, with delicate pink tinged white petals all along the twigs, where soon the almonds would begin to form. Dangling from a few of the branches were dark brown hard shells- the remnants of the almonds from the previous season. It looked like a dogwood tree. I used my watercolors to translate my "Shekadiah' onto paper. That was many years ago. The painting now hangs on the wall in the home of my oldest grandson. So, when I mentioned the word, "almond" he said, "We have a story about that on our wall." Paintings and stories... they
intertwine- both beg for interpretation, their imagery setting the foundations for shared imagination, for memory, and for great debates.

almonds+ moon+ Why? When we bake 'almond moon cookies" we can see them rise and change shape and 'grow' just like the moon itself! - And of course, why talk when we can eat?

A child is never too young to see and connect with the moon. Is there anyone in our universe who has not read, "Good Night Moon?" A true test of green 'bubbie-ness' is the urge to take everyone out to see the moon and try to touch it. It is never too cold to look for the moon. And the really great thing about the month of Shevat is how early in the evening the moon appears in the dark sky.

Hint: the 15th of the Hebrew months is always the Full Moon. So, if you want to
watch the moon "grow" or "change" you can begin on any night. And then go look at the moon the next night, and the next, and the night after that. Unless it is cloudy, you will always see changes. If you are a parent or a green bubbie and you live far apart from your 'grand children' you can compare your observations of the moon by phone or by skype.

We looked for the moon on Rosh Chodesh- we saw a very tiny slice of moon! We made 'almond moon cookies' - tiny crescent moon shapes just like the new moon. We talked. As we rolled and shaped the dough, we made round flat moons, sphere moons, half moons, and even cinnamon covered moons because the 5 yr old said that he had heard the moon is sometimes red!

When you think of the moon, you may think 'blue' 'harvest' or 'red' Whether your moon is full or new, start baking and sharing almond "moon" cookies for Tu B'Shevat. No matter how old or young the people in your life are, make, bake, or suggest 'almond moon cookies' to accompany a real "tea party" (you know, it is make-believe, with little chairs and imaginary tea)

And now for the 'cup cake tree.' Don't forget about the 'Y" as in, "Why a cup cake tree?" (I actually encountered several young adults who were stumped trying to figure out what a cup cake tree is!) A cup cake tree is something I just thought of, I made it up. It can be whatever you want it to me- but "Why?"

At a certain stage of life we begin to talk about how quickly the years go by. TuB'Shevat is known as the "New Year of the Trees" At each passing year those blossoms seem to appear more often, or sooner. With each new "blossoming" we see on deeper levels, and may begin to appreciate the inter connection of all of God's Creation.

For young children, it's birthdays that have meaning, and birthdays mean cupcakes! So, if the trees are having a birthday, let's make some 'cup cakes' for the party.
I am not going to tell you what my 'cup cake tree' will look like- just try to imagine, as I try to imagine yours! Ask the people in your life how they might make a cup cake tree- it's a great way get to TuB'Shevat- and let us see those creations!

So as the years go by, stop and appreciate the 'renewal' that comes with each new blossom. Give the kids in your life " big bite" of Tradition. Savor the taste of the almonds. Get to know the trees in your life. Let their renewal, renew you.

And give the little ones the ingredients to develop their own 'religious imagination.'
Maybe someday they will ponder that "God made the trees, and God made me"
But don't tell them.
Even if it takes a lifetime to understand God's constant and continual presence, we get a hint with each new year, and with every day, and with every night, in between.